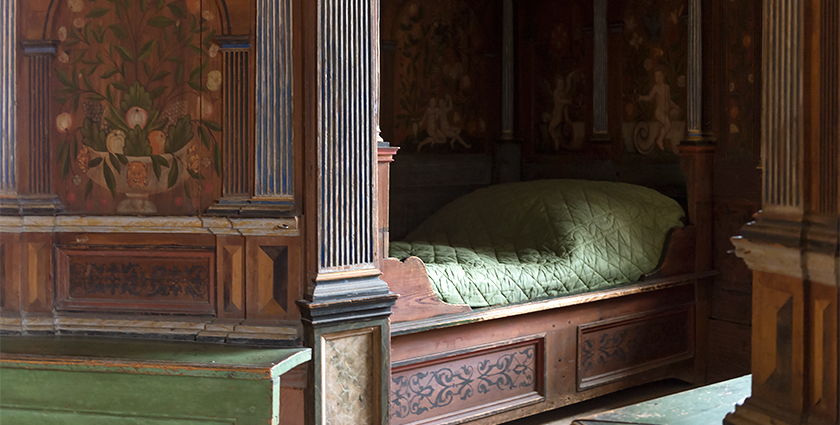 A history of style – Renaissance

The Italian Renaissance and its Northern European counterpart differ in terms of their expressions. In many respects, the Renaissance in Sweden appears purely mediaeval in its expression up until the Age of Greatness and Queen Kristina, when new influences reached the Tre Kronor Palace in Stockholm.

In the sparsely populated elective kingdom of Sweden, mediaeval interiors and furniture usage lived on long after the Renaissance had become established and widespread further south in Europe. It was not until King Gustav Vasa's sons took over the throne, and extended and modernised the various royal castles, that we can talk about a Renaissance period in Sweden. Even then, it was closely linked to Stockholm and Uppsala, as well as a few other locations.

It was not Italy's Florentine or Venetian style of nuanced, refined delicate Renaissance that came to Sweden, but rather the North German version.

The Hanseatic League's established contact network brought both influences and craftsmen to Sweden. One well known craftsman was Wilhelm Boy (†1592), a native of modern-day Belgium who worked as an architect and designer during the 16th century at several of the Vasa castles and the country's cathedrals, where he designed the tombs of various members of the Vasa family. Today, it is mostly in churches and cathedrals that we see Renaissance influences, since later fashions replaced many of the interiors from the period at the royal palaces.

King Johan III (who reigned from 1569 until 1592) modernised the Tre Kronor Palace in Stockholm. He had new royal apartments, a library and a chapel built, and rearranged one of the inner courtyards to include a colonnaded loggia as a new façade for what was then the Hall of State. With ceremonial architecture, albeit featuring Italian overtones, the end-result as a whole gave a distinctly Northern European Renaissance impression.

Carving was particularly popular at the time, and richly carved storage furniture such as cupboards, chests and bedsteads in high relief were imported from across the Baltic Sea. Coffered ceilings with painted facets and panels are among the most lavish Renaissance interiors, but painted beamed ceilings were more common. Panelled walls and wall tapestries with woven motifs were often replaced in Sweden with trompe-l'œil versions painted directly onto the plasterwork.

The interiors of the time appear very simple in comparison with contemporary interiors further south in Europe, and this remained the case well into the 17th century. Interiors and furniture are distinctly rural in character, with rustic, functional styles. Beds had curtains to keep the occupants warm, and wall-mounted window benches made the best use of daylight. This style has been partly recreated at Kalmar Castle and in Duke Karl's (IX) bedchamber at Gripsholm Castle, with its rich chalk paintings on the vaulted ceiling and its decorative painted wall-mounted panels.

Freestanding furniture gradually appeared during the 16th century. Chests were the most common type of furniture. They could be used for storage, were easy to transport, and were often richly decorated, painted or carved in relief. Inlays were used on chests, as well as on panels and doors. More advanced wood inlays were often imported. If they were made on site, they were usually produced by craftsmen who travelled to Sweden, referred to in older documents as "fretsawers". The locks and fittings of these chests were ornamented, as were their hinges later on. Heavier tables with baluster-shaped legs and wide panels, and larger cabinets with high-relief pictorial carvings were often imported from North Germany. Some tables had a base in the form of a podium, inside which root vegetables and other food could be stored in the cool floor section.

Simple benches on trestles and wooden trestle tables were most common, alongside the abovementioned chests, which could be easily moved between various residences over the course of the year. Rooms were lit up using tallow or wax candles on brass or tin candle plates.

What would eventually become Sweden's Age of Greatness began at the turn of the 17th century. The conquests of the Thirty Years' War brought many influences, objects and impressions to Sweden, and the provincial, mediaeval style was gradually replaced by new cultural expressions.

Queen Kristina (who reigned from 1632 until 1654) had received a sound upbringing and education. As an adult, she continued to show a sense of curiosity and interest, seeking out stimulating, enriching impressions and contacts. The works of art, sculptures, silverware, tapestries, paintings, music and literature that reached Sweden, not least as a result of the Sacking of Prague, further expanded the Queen's views and contact with continental trends and cultural offerings.

Queen Kristina had planned to rebuild and modernise the Tre Kronor Palace. However, these plans never left the drawing board, and reconstruction of the palace in Sweden's capital did not begin until the end of the century. Kristina chose to abdicate and leave the country. As a queen in exile, settled in Rome, she became an excellent contact for the next generation: the architect Nicodemus Tessin the Younger, who came to play a decisive role in the next chapter of the country's stylistic development.

Top image: The Renaissance can be said to have begun in Sweden when King Gustav Vasa's sons had several of the country's castles rebuilt and modernised. Gripsholm Castle is one example. The most famous 16th century room in the castle, and one of Sweden's best preserved interiors from the period, is Duke Karl's Chamber. Photo: Kate Gabor 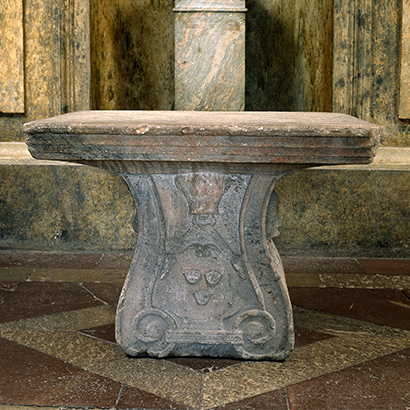 Richly decorated porticos, carved sandstone portals and other architectural details carved from stone are typical of the Renaissance. Furniture was also created in stone, such as this stone table dating from 1561, which can be seen in the Museum Three Crowns at the Royal Palace. Photo: Alexis Daflos/Royalpalaces.se 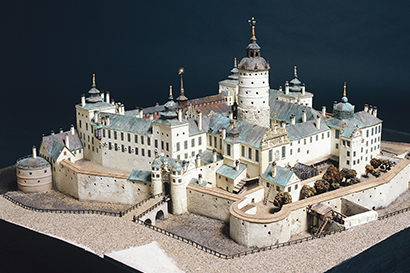 The Renaissance Tre Kronor Palace at the time of King Johan III. In the foreground is the main entrance with the Hall of State building to the right of the gate arch and the King's Apartments to the left. The model can be seen at the Museum Three Crowns. Photo: Alexis Daflos/Royalpalaces.se 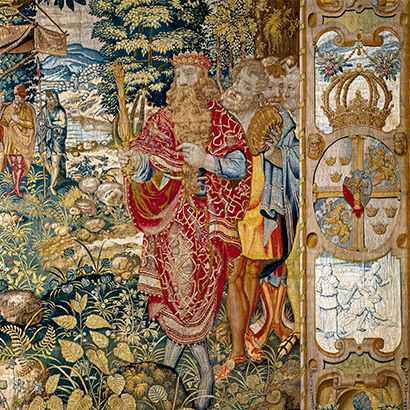 Textile wall coverings were the last word in luxury. The Sveno tapestry is one of three preserved woven tapestries made for King Erik XIV. They were saved from the palace fire, and the Sveno tapestry can now be seen in the Treasury at the Royal Palace. Photo: Håkan Lind/royalpalaces.se 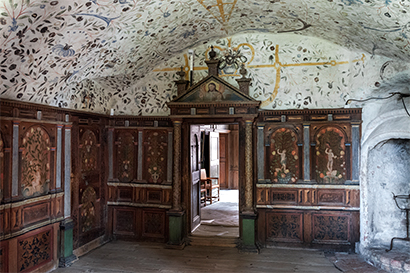 Painted wall-mounted panels and painting directly onto the plaster of walls and vaulted ceilings were more common during the Renaissance. An example can be seen here, in Duke Karl's Chamber at Gripsholm Castle. Click on the image to take a digital tour of the room. Photo: Sanna Argus Tirén/Royalpalaces.se 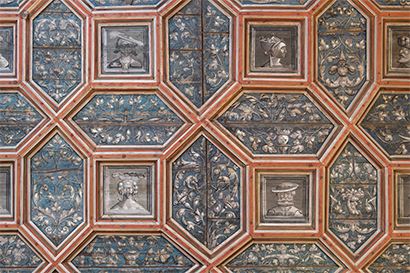 Coffered ceilings are among the lavish Renaissance interiors, but painted beamed ceilings were more common. Examples can be seen at Gripsholm Castle. The image shows a detail from the ceiling in the Guard's Hall. Photo: Lisa Raihle Rehbäck/royalpalaces.se 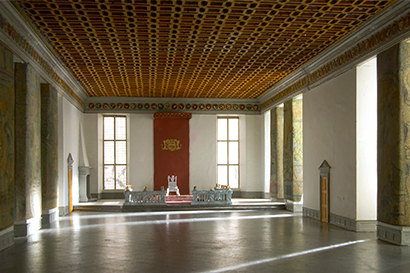 Queen Kristina planned to modernise the Tre Kronor Palace, but the plans never left the drawing board. However, she forged important contacts for Sweden, including after her abdication, for this specific purpose. The image shows a model of the Hall of State at the Tre Kronor Palace. Photo: Alexis Daflos/Royalpalaces.se

RENAISSANCE STYLE AT THE ROYAL PALACES

A HISTORY OF STYLE AT THE ROYAL PALACES

TYPICAL FEATURES OF THE RENAISSANCE STYLE

The Renaissance represents a resumption of classical forms, and began in 15th century Italy. The Italian Renaissance and its Northern European counterpart differ in terms of their expressions. Lingering mediaeval, Romanesque features and the sculptural traditions of Gothic cathedral buildings can be seen in the Northern European Renaissance. Crow-stepped gables, porticoes and architectural decorations were carved in stone. Oak and dark woods, coffered ceilings and wooden panelling with divisions, facets and panels are characteristic of the time. These sometimes had painted or inlaid motifs. Having previously been predominantly wall-mounted, furniture – as we would recognise it – increasingly appeared in freestanding form, with chests often featuring rich pictorial carving, heavier tables with baluster legs, and easily movable furniture of a simpler nature such as trestle tables and benches. Furniture often had a rectangular profile.

baluster – a turned supporting section
balustrade – balusters in a row, supporting a rail
colonette – a small column
intarsia – wood inlaid in wood for decorative purposes
portico – a vestibule built of pillars or columns

Lennart Nilsson is one of Sweden’s best-known photographers. This year’s summer exhibition at Gripsholm Castle presents some twenty of hi...