… and, as people always say, something just 'clicked' – and has continued to click ever since.

On 19 June 1976, Miss Silvia Sommerlath married the King of Sweden, Carl XVI Gustaf. Many people remember The King's reply when, at the time their engagement was announced, SVT reporter Claes Elfsberg asked him what happened when they first met: "It was in Munich, at the Olympic Games in 1972. Silvia was there working as a hostess. We met, and, as people always say, something just 'clicked' – and has continued to click ever since."

During the wedding at Stockholm Cathedral, the bride wore an elegant ivory-coloured duchess silk satin dress by Dior. The dress has a high neckline, long, narrow arms and a detachable 3.6 metre train. The train was not new – it had previously been worn by two of The King's sisters: Princesses Birgitta (1961) and Désirée (1964).

"I didn't want to create anything complicated
or trendy. I wanted to create something simple
that suited the personality of the future queen."
Marc Bohan

The dress may appear simple, but it is an unmistakable example of French haute couture at its most effective. Couturier Marc Bohan understood not only that the dress would be worn by a future queen, but also that the bride's personality was such that the role of the dress was to harmonise with and emphasise the wearer's character, rather than competing with it. The dignity of this stylish dress is reinforced by the high-class material and the fine craftsmanship.

Queen Silvia wore Queen Josefina's cameo tiara, dating from 1809, as her bridal crown. The tiara was linked together with a sprig of myrtle from the bush that Crown Princess Margareta – the wife of the future King Gustaf VI Adolf – brought with her from England at the turn of the twentieth century.

As well as the tiara, The Queen also wore a mid-19th century Brussels lace veil which had been passed down through the Bernadotte family since being brought to Sweden by Queen Sofia, the German wife of King Oskar II. The antique lace veil has been worn by several royal brides. 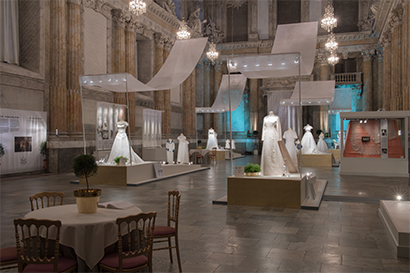 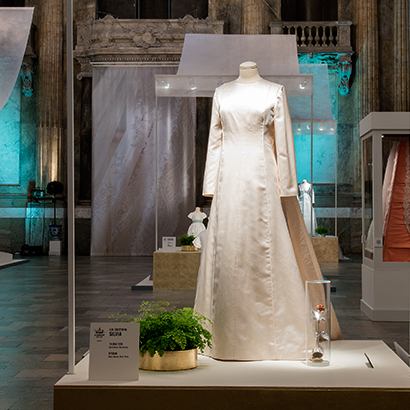 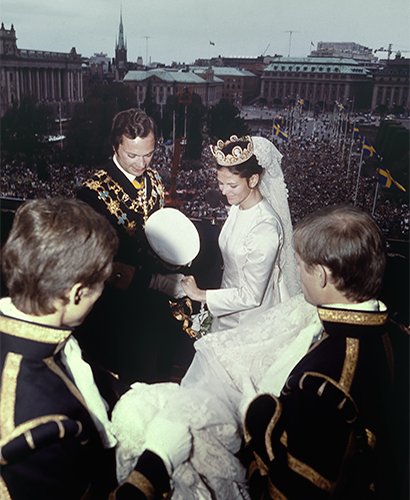 Images: The Queen is helped with her train as The King and Queen are greeted by the public on Lejonbacken in 1976. Photo from the Royal Court of Sweden's archive. Other photos: Sanna Argus Tirén/Royalpalaces.se 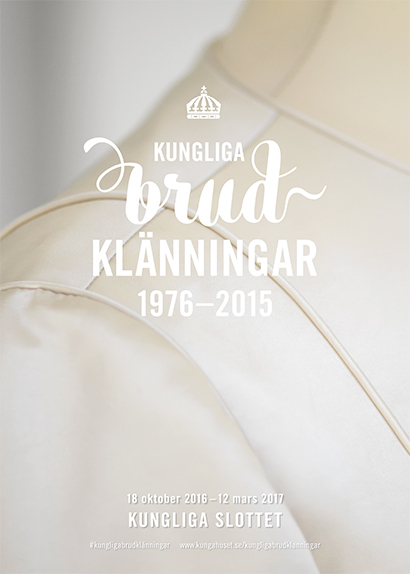 You can see The Queen's dress and accessories in the slideshow below. You can zoom in and enlarge the images via the symbols. It may take a moment for the images to load.