The first portrait seen by visitors at Gripsholm Castle is John-Erik Franzén's famous painting of our current royal family. King Carl XVI Gustaf is depicted together with Queen Silvia and their three children in 1984-85.

The groundwork for this art collection was laid as far back as the 16th century, during the reign of King Gustav Vasa. The king had artworks brought to the newly built Gripsholm Castle, and the 1548 inventory lists 98 paintings at the castle, of which 23 were portraits.

King Gustav Vasa’s youngest son, King Karl IX, had the Hall of State arranged as a ‘gallery of contemporaries’ – a collection of paintings of rulers from the time of his father’s reign – and commissioned portraits of Gustav Vasa and other contemporary European rulers.

However, the paintings that we now see in the Hall of State are not the originals – they are copies dating from the 1660s. The fate of the originals is unknown, but the fact that they were copied suggests they were in a poor condition.

Gripsholm Castle is also home to another gallery of contemporaries: the White Salon, which was created in the 1770s and 1780s by King Gustav III. This gallery includes Alexander Roslin’s 1777 portrait of Gustav III in his coronation attire.

During the second half of the 17th century, Gripsholm Castle was owned by a woman with a keen interest in art: Queen Dowager Hedvig Eleonora, who had become the widow of King Karl X Gustav at the age of 24.

She added around 200 portraits to the collection, most of which depict her relatives. Examples include a series of portraits of children, showing those of her siblings who died in their infancy. Some of these paintings are displayed in Hedvig Eleonora's Apartments on the ground floor of the castle. One of these – a painting of Gustav (IV) Adolf as a young boy, playing on a hobby horse – can be seen to the right. The artist was Carl Fredrik von Breda.

The collection officially became the National Portrait Gallery in 1822, when King Karl XIV Johan made Adolf Ludvig Stjerneld responsible for the paintings. During Stjerneld's time, the collection grew to include no fewer than 1,500 works by the end of his life.

It was also during this period that some of the most famous portraits were added to the collection, such as Johan Pasch's Hen Picture, which portrays the ladies of Queen Lovisa Ulrika's court. The painting can be seen below to the right.

In the 1860s, the National Museum took over responsibility for the Swedish State Portrait Collection. Since then, the collection has grown by more than 3,700 works from different periods.

A lack of exhibition space led to the modern portraits being temporarily moved to Gripsholm Folk High School in 1947, but they returned to the castle in 1987.

20th century portraits include paintings of Anna Behle by Maj Bring from 1908, the Swedish film star and actress Greta Garbo by Einar Nermans, Dag Hammarskjöld by Ben Shahn from 1962, and Marianne Lindberg De Geer's expressive portrait of Carlo Derkert from 1988.

The collection is added to every year with a number of works, including the Portrait of Honour, a painting of a deserving Swedish woman or man donated by the Gripsholm Association.

In 2013, a new portrait of Queen Silvia was donated to the Swedish State Portrait Collection.

Top image, photo: Lisa Raihle Rehbäck/Royalpalaces.se
The paintings have been photographed by the National Museum. 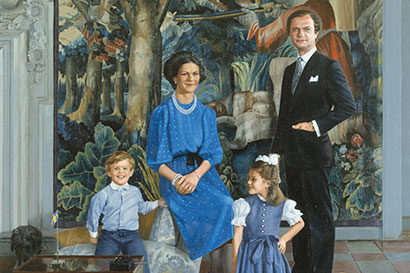 The Royal Family. Click to see the full image 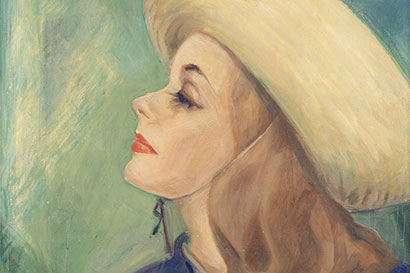 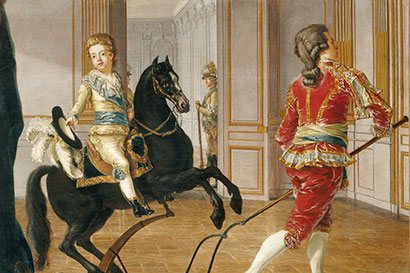 Gustav IV Adolf as a boy. Click to see the full image 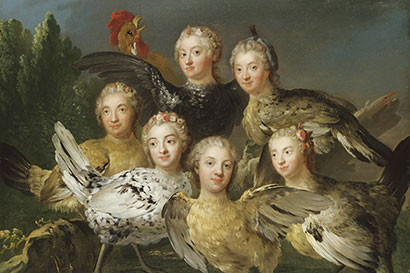 You can walk around Gripsholm Castle by yourself, but taking a guided tour can make your visit extra special.

During Epiphany holiday, 6 and 7 January, we will be opening the gates to Gripsholm Castle. Take a trip to Mariefred after the Christmas ...

The 2022 Portrait of Honour depicts the artist Britta Marakatt-Labba, known around the world for her embroidered images of Sami landscape...

Read more
A room fit for a princess